Forced from his home by conflict in 2018, Zau Lawn is now trying to bring aid to some of the thousands of civi...

Forced from his home by conflict in 2018, Zau Lawn is now trying to bring aid to some of the thousands of civilians stranded by fresh clashes in the aftermath of Myanmarâ€™s military coup.

Since March, Zau Lawn, a pseudonym for a 24-year-old divinity student in northern Myanmarâ€™s Kachin State who asked that his real name not be used, has broken nightly curfews to travel clandestinely from the state capital, Myitkyina, to the forests of Injangyang township more than 50 kilometres north.

He takes a three-day journey by car, boat, and motorcycle, risking run-ins with security forces, to help people trapped by conflict between military junta forces and the armed wing of the Kachin Independence Organisation â€“ among the largest of more than 20 ethnic armed groups lining the countryâ€™s border areas.

â€œAlthough I am a biblical student, I had to lie. I couldnâ€™t tell [security forces] I was helping those who fled war,â€ he said of being stopped and questioned along the way. â€œIf the Burmese soldiers found me with humanitarian items, I am afraid that they would harm me.â€

The 1 February military coup has re-ignited or exacerbated some of Myanmarâ€™s long-running civil wars, and pushed the country deeper into crisis.

The new fighting in Kachin â€“ the UNâ€™s humanitarian aid arm has reported nearly 50 clashes since mid-March â€“ has uprooted some 5,000 people, marking the stateâ€™s first large-scale displacement since 2018. Shelling and mortar fire have killed or injured more than 10 civilians. Some of the displaced have returned home, but many remain afraid or unable to do so. They are being sheltered and supported by local church groups â€“ long at the forefront of humanitarian response in Kachin, where many areas are out of reach of international aid â€“ or are living in hastily constructed camps.

â€œIf the Burmese soldiers found me with humanitarian items, I am afraid that they would harm me.â€

Fighting has escalated in other states and regions as well. In northern Shan State, which borders Kachin, more than 10,000 people have fled their homes this year, including about 6,000 since the coup. And in southeastern Myanmarâ€™s Karen State and Bago region, fighting between the military and the Karen National Union continues to intensify, and has displaced almost 40,000 civilians, according to UN tallies.

The New Humanitarian spoke with six local aid workers in Kachin, where people like Zau Lawn have joined with local NGOs and charity groups to piece together aid to the newly displaced as well as tens of thousands of others who fled fighting over the last decade. Humanitarian responders say they are increasingly afraid to travel as the military indiscriminately kills civilians and arrests thousands, often without charges. Cash shortages, the fear of encountering police or soldiers, and ongoing shelling and airstrikes have severely limited relief operations.

The coup has forced the Karuna Mission Social Solidarity (KMSS) â€“ a Catholic non-profit, and one of the largest humanitarian operations in the state â€“ to dramatically scale back its work, said its Myitkyina-based programme coordinator. Before the coup, it had been gearing up to help displaced people return home. That plan has been cancelled, while programmes including education, sanitation, and hygiene have been reduced, she said. The group has mainly focused on food aid and protection in displacement camps where it still has access.

â€œIt is hard to plan strategically in the current context,â€ said the coordinator, Rosa, who asked to be identified by her Christian name. â€œCOVID hit us, and now the coup. From a humanitarian perspective, the situation has changed from complex to chaotic.â€

Conflict in Kachin has erupted sporadically since 2011, when a 17-year ceasefire between the KIO and the military collapsed. The KIO has been fighting for self-determination since 1961.

Zau Lawn is among roughly 97,000 people across Kachin who have fled their homes over the last decade. Most live in camps â€“ often on church compounds â€“ or displacement sites across parts of the state. More than 39,000 of the displaced live in areas governed by the KIO.

In Injangyang, where clashes broke out in mid-March, many of the newly displaced also fled fighting in 2018, and some had only recently returned to their villages.

Days after the clashes, Zau Lawn borrowed money from a local church fund to transport basic relief items to a forest area where more than 500 people were sheltering.

He arrived to find families sleeping in skeletal, uncovered bamboo shelters without enough food, supplies, or medicine. Since then, Zau Lawn and a few friends have returned twice, carrying more food and relief items and helping people to build roadside shelters, which they covered with tarpaulins to shield them from the coming rains. He knows of two other villages in the area that havenâ€™t received any aid at all.

Zau Lawn said he fears he could face repercussions from the junta for his aid work. â€œWhat I am afraid of the most is that they will harm the people that I am living with: my relatives and the people with whom I communicate,â€ he said.

But heâ€™s also motivated by empathy, having fled war himself. â€œI prefer to risk my life doing something good and useful,â€ he said. 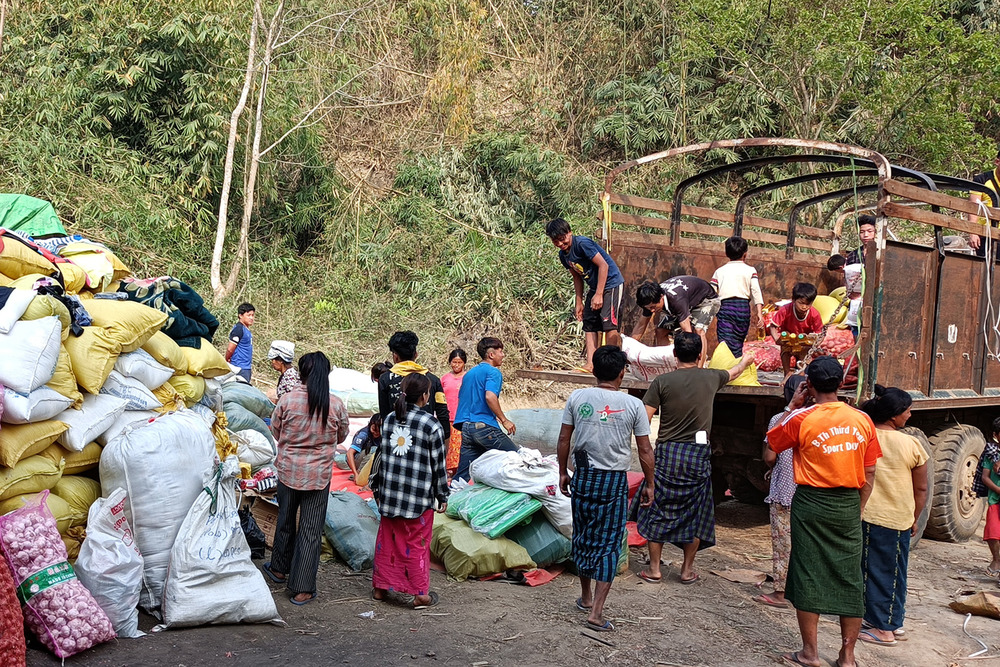 Across the country, the coup has elicited new levels of empathy from the ethnic Bamar majority, many of whom have publicly apologised for not being more attentive to the plight of non-Bamar people suffering under military violence.

â€œIn the past, they didn't believe or understand our struggles,â€ said the director of a Christian charity in Myitkyina, who asked that her and her organisationâ€™s names not be used. â€œWhen we posted our activities of helping displaced people, they cursed us in the comments... Now, they can understand the militaryâ€™s brutality toward ethnic minorities.â€

â€œWe cannot openly transport humanitarian aid for displaced people; we have to pretend [the items] are for trading or other purposes.â€

Aung Htet Pai, a pseudonym for an ethnic Bamar man who asked that his real name not be used, is among those taking risks to deliver aid to displacement camps. The 24-year-old fled to Myitkyina in March after security forces began firing indiscriminately on protesters in his home city of Mandalay, about 500 kilometres south. Within days, he began collecting donations and delivering food to camps near the city; he has since built a well and a medicine dispensary with some friends.

â€œWe cannot openly transport humanitarian aid for displaced people; we have to pretend [the items] are for trading or other purposes,â€ he said. â€œWe cannot leave any evidence in our phones or carsâ€¦ I always feel insecure, like someone is watching. I feel like someone will stop and arrest me.â€

Cash flow has posed another major barrier. The director of the Christian charity said donations to her group have increased since the coup, including a new influx from ethnic Bamar people. But she can access little of the funds: Most banks around the country are closed amid a nationwide civil disobedience movement, while ATMs have withdrawal limits and often run out of cash. The charity director said she recently resorted to selling her jewellery to cover donations promised by people abroad who are unable to transfer the funds yet, and has had to turn away other international donors because she couldnâ€™t receive the money.

Humanitarian access in Kachin was already severely limited under the former civilian government led by Aung San Suu Kyi, who has been under military detention since the 1 February coup. A few months after coming to power in 2016, her government began refusing to allow UN agencies to travel to regions controlled by the KIO and other remote areas, effectively leaving more than two thirds of the people displaced by the conflict without international aid.

Access was also volatile for local NGOs. In 2018, for example, the military accused the stateâ€™s largest humanitarian aid provider, the Kachin Baptist Convention, of supporting the KIO by delivering food supplies to displaced people, forcing the group to briefly suspend its operations in KIO territory. 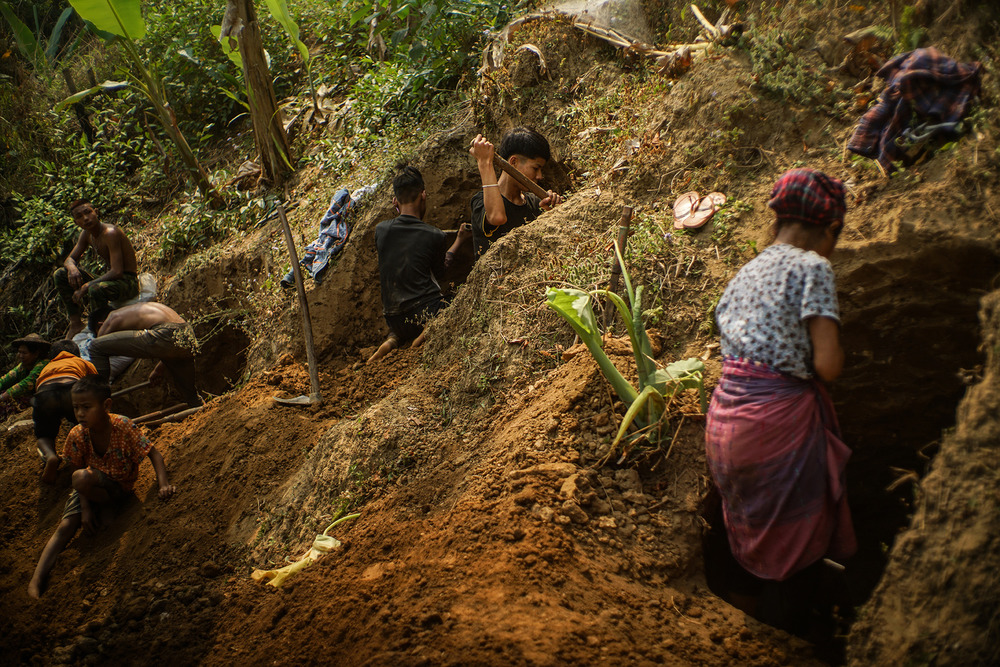 Yawng Htang/TNH
Women and children dig a bomb shelter in Woi Chyai camp near Lazia in northern Myanmar. People living in camps near Laiza have dug shelters in case of airstrikes amid renewed conflict since the 1 February coup.

Since the coup, the geographic scope of aid delivery for all humanitarian groups has narrowed even further.

â€œAll staff are travelling with fear and insecurity... [The military] can harm us in many ways,â€ said Rosa of KMSS. She added that her group has stopped travelling to KIO-controlled areas since the coup, as they now avoid negotiating for permission with the military.

A representative from the IDPs and Refugees Relief Committee (IRRC), established by the KIO, told The New Humanitarian that access for other aid groups is also dwindling, and that itâ€™s doing its best to provide food and basic relief to fill the gaps.

The director of the Christian charity in Myitkyina said her group used to travel to camps throughout the state but has now suspended almost all of its trips. When it does deliver relief, the group splits its cargo among several vehicles to not attract attention.

She worries that displaced people will face a growing dilemma between their safety and their need for survival. â€œIDPs are in a very difficult situation,â€ she said. â€œIf they go out to work, they could be shot to death at any place. If they stay inside the camp, they need food supplies.â€

A local politician who represented Injangyang township before the coup said she expects access to drop even further â€“ and humanitarian needs to rise â€“ in the coming weeks and months.

Shelters are increasingly overcrowded, food is growing more scarce, people have fewer ways to earn money, and fighting continues to escalate with no end in sight.

â€œI told [people in Injangyang] to eat frugally; save for the long term,â€ she said. â€We donâ€™t know what will happen.â€